MFS in Bangladesh – The Arsenic Crisis and Access to Safe Water

This week Louise Andersson a BA student in Geography shares with us her BA thesis fieldwork experience in Bangladesh.


I recently came back from the 'Country of Bengal', which is what Bangladesh means in Bengali. Some may say that Bangladesh also can be called the 'Forgotten Country' due to its unfortunate preconditions, mainly in terms of natural disasters, poisoning catastrophes, grave corruption and of course, deep and widespread poverty.

I am a student at KG III currently finalizing my Minor Field Study (MFS) conducted in rural southwestern Bangladesh regarding the access to safe water - from a gender perspective. I am thus back from my first developing fieldwork experience.

Rural Bangladesh is currently facing a severe drinking water crisis. Millions of rural citizens lack access to safe water. This is due to groundwater sources contaminated by naturally occurring arsenic. Severe health problems are correlated with long term exposure to arsenic such as cancer and liver disease. One of the first symptoms is skin lesions (acnes) - also called Arsenicosis. People in Bangladesh afflicted with Arsenicosis suffer an enormous social stigma. For women, the situation is particularly difficult as a woman's attractiveness lies in her beauty which is often judged by her skin complexion. Being afflicted with Arsenicosis makes it difficult for single women to marry (on which future depends). The impact of the arsenic crisis and the access to safe water further affects women differently as it is exclusively women who fetch water for the household. When arsenic was found in almost all private tube wells, one to two public safe water tube wells have been installed in almost all of the six arsenic acute villages I visited. A consequence of this is a difficult dilemma now being faced by rural families, and especially by rural women: fetching safe water (arsenic free) from long distance outside of the homestead at the risk of being harassed/sexually assaulted - or to fetch unsafe arsenic contaminated water from a private tube well located within the homestead. As the symptoms of being arsenic poisoned are not immediate (it can take several years) families continue to consume arsenic contaminated water. A slow mass-poisoning of millions is thus taking place in rural Bangladesh right now – and the gender related differences of the impact of the arsenic crisis and the access to safe water are substantial. 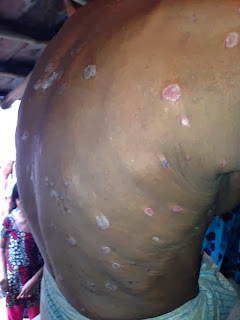 Skin lesions of Arsenicosis
I would summarize my first fieldwork experience as a quite 'earth shattering' experience. First and foremost because of the real and direct way poverty was encountered as I was interacting, communicating and engaging in marginalized people's life. It was also a new experience to me being exposed to so many more and also increased risks - which of course being in a developing country often implicates. The political situation in Bangladesh is unstable and tense. This year the political instability has spilled over into violence, where political rallies, riots and violent demonstrations have been frequent. The first months of the year Swedish UD advised not to travel to Bangladesh due to the political instability. The political situation when I went to Bangladesh in September was better, although it was announced by the Swedish Embassy in Dhaka to take precaution as strikes and demonstrations (so called Hartals) spontaneously can emerge. Death sentences of former parliament leaders charged for war crimes or crimes against human rights in the past - along with the fact that next election is soon to come (January 2014) - are main reasons behind the increased political instability.

The political instability more or less permeated my time in Bangladesh, although I learned to adapt to it. In order for us to plan our trips, phone calls were made everyday by my team to make sure no political meeting or demonstration was going to take place where we were going and we followed the news frequently. One day we could not go to a village due to a political demonstration. During my first days in Dhaka we accidently got stuck in a chaotic traffic jam, all of a sudden sirens were shouting and demonstrators came running from our right and passed our car. A political meeting was apparently taking place only a few blocks away from where we were. We could luckily move away from the area relatively smooth. Feeling more or less isolated further characterized my time, although I learned to adapt to this too. We could in the end however, conduct the fieldwork relatively undisturbed by the political instability.

The 25th of October implied the start of a three month long non-partisan government caretaker system determined by Bangladeshi constitution. This period is sadly associated with increased political instability. My main contact person now living in Sweden, mentioned this date and time to me before my trip to Bangladesh but he did not prevent me from going back home in November - so I thought it was going to be fine and therefore wanted to wait and see how the situation would evolve, while I was there. However, after a discussion with the Swedish Embassy in Dhaka and with native people around me, I was recommended to try to finish my study before the 25th of October. After a judgment of having well enough data to finish my study, I was a couple of days later back in Sweden, quite dazed and with a palette of mixed feelings, but with new experiences I highly treasure. 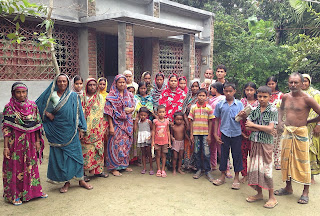 Posted by Martina Angela Caretta at 5:59 AM