SIDA criticised by National Audit for their EcoEnergy support

The events around  Sidas involvement in the Swedish sugar plantation in Bagamoyo continues  to surprise. I thought I know much about the formal aspects of the SIDA support to these plans. But when I recently checked the web address of a document I wanted to refer to in a future publication I was surprised.  I was looking for the decision from early 2014 to support the project with a loan guarantee. The Swedish television had made that document public in connection with an investigative programme in August 2014. And here it is – the decision to support Eco Energy:

The document says that SIDA shall support the company with a guarantee (säkerhet)  for a maximum of 120 million Swedish Crowns for loan that EcoEnergy has got from the Standard Bank South Africa.

But when I googled for that document I was using the official number 13/000545 and did find another document, that I had never seen before and that, to my knowledge has not been mentioned in the press. 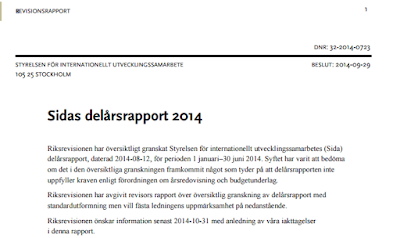 In this document from 2014 the Swedish National Audit Office openly criticises SIDA not for the decision but for their  book keeping of the economic flows emanating from the decision. According to the auditors the money sent for this project should be registered in the books as a claim (fordran) rather than as a grant (bidrag) since it was only a guarantee for a loan the company had got from a commerical bank and which should never be used if the project was successful. But SIDA recorded it as a grant (bidrag) on the basis that "risks were deemed so high in the project that the chance that SIDA would get money back is very low" . But as the National Audit Office says "this reasoning is not part of the background material for the decision".   Anyhow it is embarrasing to see that SIDA already then realised they were not just guaranteeing a loan (as they said in the document) but actually planned to give money away.

The National Audit Office recommended SIDA to ask the government for permission on how this has been handled. I do not know how SIDA responded to this . Since then the money flow has (temporarily ? ?) stopped but as Development Today wrote recently The Bagamoyo saga drags on.