Notes from the field

I recently came back from the last fieldwork for my PhD during which I gathered data on the modes and practices of irrigation in the villages of Tot, Kenya and Engaruka, Tanzania. These two systems have a long history that has been documented by anthropologists, archaeologists and geographers (i.e. Sutton, Watson, Moore, Soper..). However they have not been studied in their current conditions and development, which is what my work is focusing upon. The peculiarity of these two system is that they are indigenous and they have been successful in making agriculture flourish in dry-land areas. Thus, in the context of the call for a new green revolution (for Swedish speakers see the article on this month Naturskyddsföreningen´s magazine) to close the yield gap and ensure food security - also through irrigation projects -, it is crucial to look at how indigenous systems have fared. This research can feed into the current debate on the Guardian on the sustainable water use in agriculture, which appears to favor local solutions.

Nevertheless the new green revolution is becoming apparent in the village of Tot, Kenya where the Red Cross started off an irrigation project. According to the Kenyan Red Cross livelihood officer  I interviewed, (who did not want to be recorded - ah, the challenges of the field!) sprinkle irrigation will allow for yr round production of cash crops i.e. green gram, onions and tomatoes that farmers will be selling to wholesalers in Eldoret. 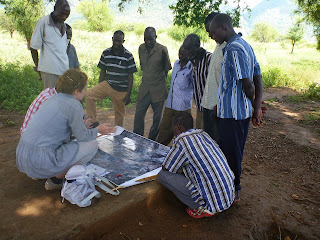 While not yet operational, the project is already visible in Tot and has already modified the fields landscape. Here is a picture of a participant mapping exercise done under the Arron tree, where traditionally all decisions regarding irrigation are taken by male elders. On this same spot there is now a cement drain for the pipes of the Red Cross project.

It will be interesting to follow up on this project and investigating how it will revolutionize agriculture in Tot and how farmers will autonomously use it in a few years time when the Red Cross will phase out. This last element is especially relevant in order to draw a comparison with the neighboring Italian Cooperation Wei Wei valley irrigation  project which is now being extended.

Hopefully carrying out such studies will be possible given that local authorities and representatives of the organizations dealing with these projects were available to meet, but not to be recorded. Such unexpected element represented certainly a big challenge for me as a a researcher, which brings me to the second point I want to bring up in this post: fieldwork challenges.

Conditions on the ground were quite challenging this time in the field. Not only weather related conditions as in Engaruka: 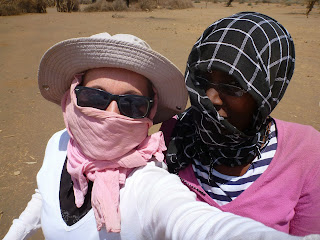 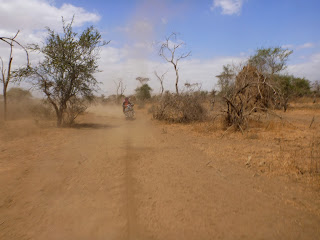 The scarce vegetation and the sandy soil were in fact the perfect mix for wind storms that forced my assistant and I to cover our mouth and nose to be able to breathe properly.

While geographical fieldwork has historically been a “male solo endeavor” (Frohlich 2002:50), being a single western white woman does not probably represent the ideal condition to carry out fieldwork in such a diverse cultural environment. Speaking Swahili made me even more aware of what was going on around me and more exposed to the psychological consequences of hearing stories about violence and abuse against women and children and understanding what men were shouting at me and my female assistants.

Fieldwork over these last three years has certainly changed me as a woman and as a researcher. I had not envisioned the instances I mentioned above before going to the field, because ethical and gender related dilemmas were never brought up in any conversation with fellow researchers, who happened actually to be mostly men. Now, at the end of my fieldwork endeavor, I realize that - and I am aware it is not rocket science - that female researchers in some environments are faced with a unique set of challenges which female students should be made aware of during their undergrad education.

Posted by Martina Angela Caretta at 8:29 AM