Where is the Swedish Black Earth?

I have a map here of where -- approximately -- Swedish land investments in Russia and Ukraine are located (The list of Swedish investments was posted earlier on this blog).  I have taken the information on where Swedish investments are located from the respective web-sites of these companies, which all list (or show) the oblasts (first order administrative units) they are active in. I have merely put a dot in each oblast for each company. I do not know in which raioni (second order administrative units) these companies have their farms, so there is likely to be positional inaccuracy with respect to the actual location. For example, both Black Earth Farming and Agrokultura (Alpcot Agro) are in oblasts in the central black earth district in Russia, but within these oblasts, I do not know if the farms/fields of one are to the west, east, north or south of the other. Indeed they are probably all intermixed within these oblasts. In any case, the dots themselves, according to the map scale, can be larger than one or two raioni put together. This is a first draft of the map, and the idea with this map was only to get a general idea of where the different Swedish companies have invested to discuss the geography of this investment and the question of consolidation of holdings. The source for the soil data is the Harmonized World Soil Database.

Keeping in mind of course that Swedish companies constitute a fraction (albeit an important fraction) of all foreign agricultural investment in these countries, the geography of these investments are nevertheless interesting. The first point to make is that the bulk of farming takes places in a stretch of territory from western Ukraine, across northern Ukraine and into the Central Black Earth District of Russia (and then a little further east), in other words, the northern steppe and steppe-forest region. Though parts of this area actually fall outside the famed black-earth zone (particularly in Ukraine), this sweep of territory receives more rainfall compared to areas further south. As an official from Agrokultura said "A few units less sun is not going to bankrupt you, but getting no rain will" (quoted in this article) and indeed Agrokultura is consolidating its Ukrainian holdings around its hub in Lviv (in western Ukraine). It should also be said that this preponderance of Swedish investments in this stretch of territory corresponds to what Deininger et al (see previous post) report about where the largest farms are located in Ukraine.

The need to consolidate operations is another aspect to discuss. On the one hand, agro-holdings or large farms like to spread out their land holdings to mitigate weather related risk. Drought is a regular occurrence in steppe agriculture, particularly the farther south one goes. Spreading investments  around a larger territory means that drought in one area can perhaps be mitigated by adequate rainfall in another. At the same time, this creates a logistical and supervision problem -- overseeing far-flung fields or farms -- and then it can be challenging to bring product to market.

With respect to bringing product to market, Black Earth Farming in their corporate literature stresses their (relative) closeness both to the Black Sea and Baltic Sea for export purposes. Previously BEF had a cluster in Samara (in Russia), but they have closed that cluster down -- were the logistics too challenging?

Agrokultura and Trigon Agri stand out as being spread out over a large area. Trigon Agri has a milk producing cluster in Estonia and outside St. Petersburg, but they have also consolidated their land holding, swapping land in (again) Samara and Stravropol for land in Rostov in southern Russia, which, as their corporate literature says, is close to export outlets.  Agrokultura's dispersion reflects their purchase of LandKom (active in many oblasts in Ukraine), and Agrokultura has been working to consolidate their Ukrainian holdings ever since. (For the purposes of disclosure, I should perhaps mention here that I own a minuscule amount of shares in all three companies that are traded on the Stockholm Stock Exchange and that have invested in post-Soviet agriculture.)

There must be a balance between geographic diversity for the purposes of weather mitigation and consolidation for better operational oversight and logistical efficiency, and it would be interesting to study that question further.

All comments, by the way, are welcome. I think these investments are interesting to follow, but it's not my main line of research. 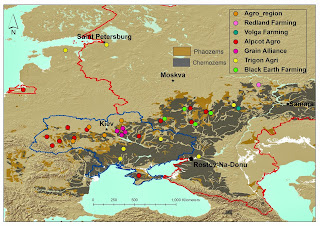