Does Agribusiness Contribute to Rural Development?

I will again summarize an article from Zerkalo Nedeli, again written by Elena Borodina, but this time not dealing with small-scale producers, but the largest producers in Ukraine. The article with the title “Unequal Marriage without Government Oversight” was published on August 21 and can be found here (in Russian). The point of the article is to question the degree to which the super large agroholdings will really contribute to national and/or rural development, which is sometimes claimed by advocates of agroholdings (including even the World Bank).

Borodina first gives an account of the polarization of the agrarian sector towards either really small or really large farms, where many people in rural areas are becoming landless while land is being concentrated more and more under agroholdings. At the beginning of 2014, she states, the number of agroholdings approached 140, which controlled 6000 separate farming enterprises (40% of the total), on about 8 million ha of land (40% of the land cultivated by farming enterprises). Of all registered farming operations, these agroholdings harvest about 50% of Ukrainian winter wheat, more than half of the corn and rapeseed, a third of the sunflower seeds, and over 80% of chicken meat. Because land reform has not been completed (among other things, agricultural land sales are as yet not allowed in Ukraine), a “shadow” land market has arisen, which these companies benefit from, and it helps them attract capital.

So these companies do attract capital, which they invest in operations, but, as Borodina points out, there appears to be an inverse relationship between the growth of investment in the agrarian sector and the number of people employed in the agrarian sector. Below I have reproduced a graph using the same data as in her diagram in ZN (note: the original graph measured investment in Ukrainian Hryvnia, but I changed that into dollars using the average annual exchange rate for that year. Export sales and many inputs are often dominated in USD so this makes sense, especially considering the devaluation of the UAH in 2008). 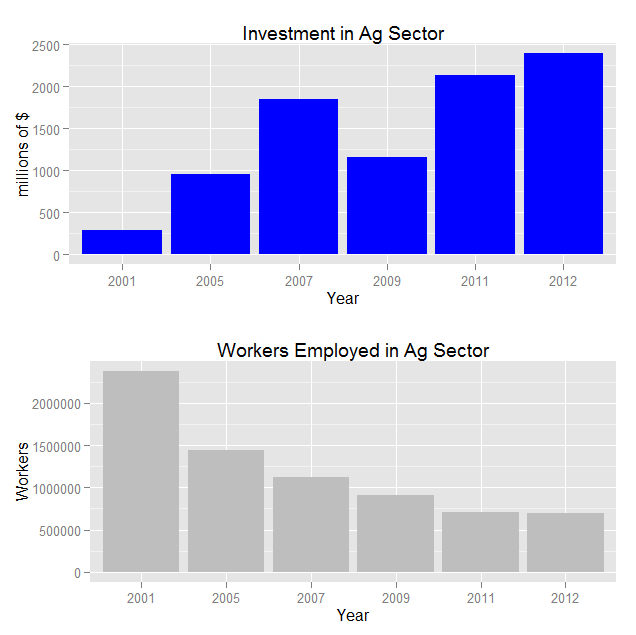 Borodina also points out that the agroholdings are very good at attracting capital either through IPOs and stock emissions or thanks to their access to inexpensive credit from international financial institutions such as the European Bank for Reconstruction and Development (EBRD) and the International Finance Corporation (IFC) which is part of the World Bank, and export credit agencies of different countries like Austria and Denmark. For example, the Danish Export Credit Agency, from 2003 to 2011, insured the export of livestock products valued at 154 million Euro, from Ukraine. The International Finance Corporation has since 2010 provided financing in support of Ukrainian agribusiness to the tune of 282 million dollars, while the EBRD, over the last 5 years, has presented credits totaling 55 million Euro to some of the largest agroholdings in Ukraine.

The larger point that Borodina seeks to make is that all this support to large-scale agribusiness in Ukraine will not lead to the development of the countryside, but is rather a factor contributing to the ongoing distortion and polarization of the agrarian sector in Ukraine.
Posted by Brian Kuns at 5:40 AM