I am not very well informed about Bill Gates activities concerning the development of African agriculture. I am aware of the recent critique from GRAIN, but this is not the reason for this blog post. Before that critique was published Bill Gates tweeted the following (Oct 28th).

"Most poor farmers’ tools haven’t changed in ages. These 4 inventions are making a difference: http://b-gat.es/1wA8DRB   " 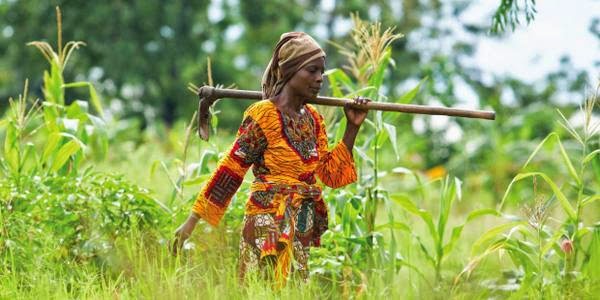 The reason I answered was that this misconception, that no technological innovations have happened in African agriculture "in ages", is so common. It is not strange that Bill Gates also has this misconception. What worries me is that so many development "experts", philantropic billionaires, not to talk of agro-business directors and land grab promoters are led by this total lack of understanding of the role of innovations in the history of African agriculture and in what small-holders do to today. If you do not know the history of what you want to change, how can you be credible then? How is it possible to argue that African farmers need innovators mainly from outside?

First: the picture shows a woman carrying a steel hoe of the kind that you can buy on markets and in hardware shops all over Africa. It does not represent an implement that has not changed in ages. It is most likely a recent industrially produced hoe.  I own two such hoes - a small one produced in South Africa and a bigger one produced in China, but bought in Tanzania. I later bought hoe handles on a market in Chesoi in Marakwet and was happy to see them fit like IKEA pieces into my two hoes once I brought the handles back to Sweden. The spread of such hoes certainly makes the local innovations less visible. I do not know how long such industrially produced hoes have been on sale in Africa.  But what I know is that there are lots of places where locally developed hoes are still the rule. And I would bet that the great grandmother of the woman on the picture used a locally produced hoe. Such hoes were developed for different kinds of work and were the result of a series of innovations by farmers and local blacksmiths. African agricultural technology does not lack innovations and innovators.

The historical study of agricultural technology in Africa is not very well developed so perhaps Bill Gates can be excused. Even the academic literature on farming in Africa abounds with similar misconceptions. The works on the history African farming implements are few and off the cuff I can only suggest two readings on the tilling implements. This is the first point of departure:

Already the cover of that book gives you an idea of the enormous variation of tools. Roger Blench has contributed a geographical broader overview in his chapter African agricultural tools: implications of synchronic ethnography for agrarian history from which an inspiring agenda for further research  is also developed. It is published in the edited volume Archaeology of African plant use (2013). The manuscript is available at Roger Blenchs own website  http://www.homepages.ucl.ac.uk/~tcrndfu/IWAA/Blench.pdf


From the enormous variation of African tools we can draw the conclusion that they were the result of several phases of innovative change all of which must be understood in the context of innovations in farming systems and social factors.  An extreme case is illustrated above. Bokoni farmers in South Africa developed intensive and terraced agriculture long before colonialism. In the same area large bored stones are found and it has been shown that the stones functioned as weights for very large hoes. These probable reflect both the farming systems and the gendered division of labour with men taking a larger share of the tilling than in more extensive forms of agriculture.

If Bill Gates can be excused for not knowing the history of tilling implements in Africa, it is however a well-established and widespread fact that African farmers has shown innovation in other fields -- that of crop development and that of investments in terracing, irrigation and and other forms landesque capital.   The standard "common-sense" view of African agriculture as characterised by inertia and lacking innovative capacity is (as I argue in a recent paper) one of the Four myths in global agrarian history.