I have been studying the so-called Swedish agroholdings, and hope to have an article out this year about them. One thing – that won’t be in the paper –that I noticed and want to comment on is how they report on the impact of precipitation on crop yields. Naturally of course precipitation is one of the main factors affecting crop yields, but in dry or drought years, the companies tend to simply report that particular season’s deviation from monthly precipitation averages over a seven or ten year period. See Black Earth Farming’s Q4 Results p2, or Trigon Agri’s 1H Results from 2010, p 10, for examples. This is all fine and good, but it doesn’t address the question of how frequently such deviations from the average occur. The climate in the Eurasian steppe is quite variable, and how frequently droughts occur and how long they last would seem to be important information to know. Also, seven or ten years is simply too short a period to be talking about climate.

For this purpose, I have been looking at the Standard Precipitation Index (SPI), which is what the US government uses to asses drought conditions in the US (See the website of the US National Drought Mitigation Center). Basically the SPI is a measure of meteorological drought, only taking rainfall into account. (An important distinction: “agricultural drought,” for example, would take into account soil moisture). Here is a definition of SPI from this website: “The SPI was formulated by Tom Mckee, Nolan Doesken and John Kleist of the Colorado Climate Center in 1993. The purpose is to assign a single numeric value to the precipitation which can be compared across regions with markedly different climates. Technically, the SPI is the number of standard deviations that the observed value would deviate from the long-term mean, for a normally distributed random variable. Since precipitation is not normally distributed, a transformation is first applied so that the transformed precipitation values follow a normal distribution. The Standardized Precipitation Index was designed to explicitly express the fact that it is possible to simultaneously experience wet conditions on one or more time scales, and dry conditions at other time scales, often a difficult concept to convey in simple terms to decision-makers. Consequently, a separate SPI value is calculated for a selection of time scales, covering the last 1, 2, 3, 4, 5, 6, 7, 8, 9, 10, 11, 12, 15, 18, 24, 30, 36, 48, 60, and 72 months, and ending on the last day of the latest month.”

Basically to summarize, the SPI provides a score for the rain anomaly for each user-defined period against the longer record for that period.

Here is the 3 month SPI for a weather station in Kursk, an oblast in western Russia where the Swedish listed company Black Earth Farming operates.  What this means is that for each month, the precipitation amount for the three month period ending in that month is measured against the longer climate record. Though only 2013 and 2014 are shown here, the calculations are based on a climate record going back to 1974. So you can say that the fall of 2014 in Kursk was indeed very dry in terms of the longer climate record, though late Spring (June) had favorable conditions. I say "indeed" because BEF has called the fall weather in their operational area, which includes Kursk, unusual. 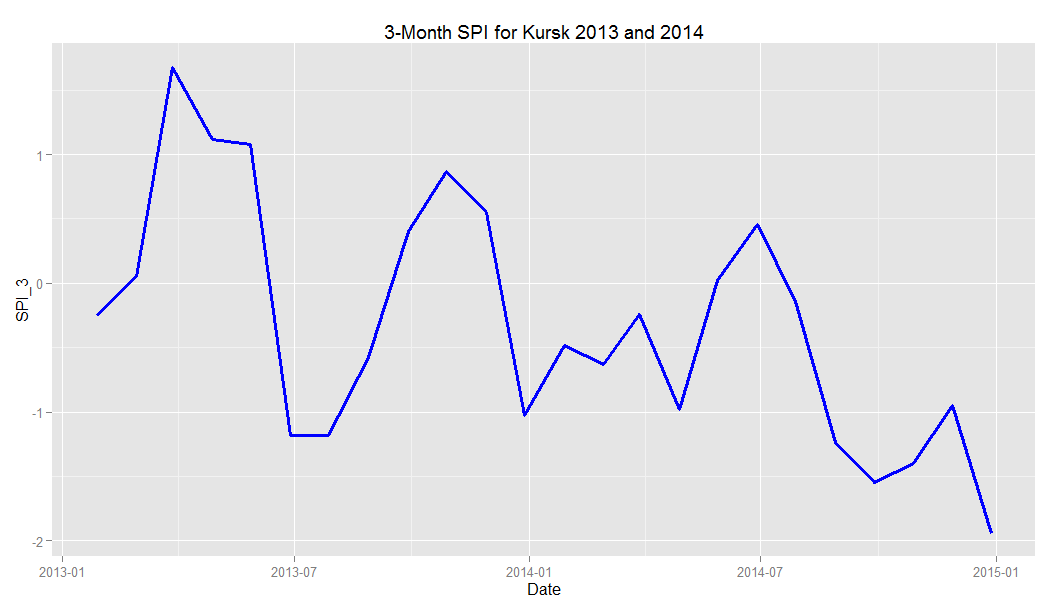 (By the way, I used the SPI-app available at the web-site of the US National Drought Mitigation Center to make the SPI calculations. The Kursk weather station data comes from this web-site, which I have noticed in other contexts appears to be the same data as the climate data available on the FAO web-site, though not in the case of Kursk where the website had more data than FAO. Below I also use precipitation data from a weather station in Voronezh and that data comes from the Global Historical Climatology Network (GHCN) Version 2. The web-site source for Kursk compiles monthly values based on daily precipitation, and in some cases some daily values were missing. In those cases I just used the provisional monthly precipitation sum. Also in some cases GHCN lacked values for Voronezh, and where possible I filled in those values using data on Voronezh from the same web-site. Sub-optimal but this is just a blog.)

This next graph shows the potential usefulness of SPI. It shows the average of the 3-month SPI for the month of August between 2007 and 2014 for a weather station in Kursk and one in Voronezh (the SPI for the two stations are averaged together) plotted against Black Earth Farming’s Corn (Maize) yield for the same years. (Voronezh is another oblast where Black Earth Farming (BEF) is active). Note that BEF also farms in the neighboring oblasts of Lipetsk and Tambov, but I could not find rain data for weather stations in those oblasts going up to 2014, so I had to make do with what I had. In any case a pretty neat correlation resulted. I have modeled the corn yield and SPI relationship using a 2nd order polynomial based on the assumption (perhaps mistaken?) that, after a certain amount, there are diminishing returns to rain. I tried the same for wheat and 3 and 6 month SPI for June. If you eliminate 2012, you also get a good result here. A case can be made for eliminating 2012 because BEF themselves, when explaining their disappointing 2012 harvest, seemed to put that blame on odd temperature dynamics, i.e. an unusually late spring, combined with sudden increases in temperature resulting in wheat going through its growth stages really fast at the same time that there were 3 weeks with no rain in May (2012) (See their 2Q report 2012, p. 2). Under such circumstances SPI will be less successful in correlating with yield. 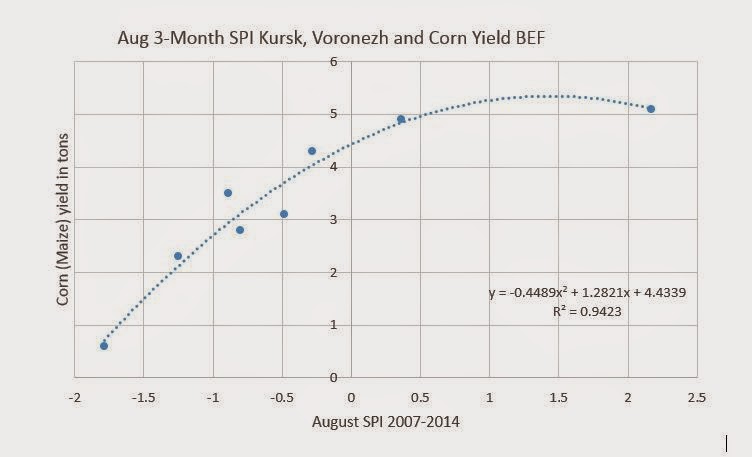 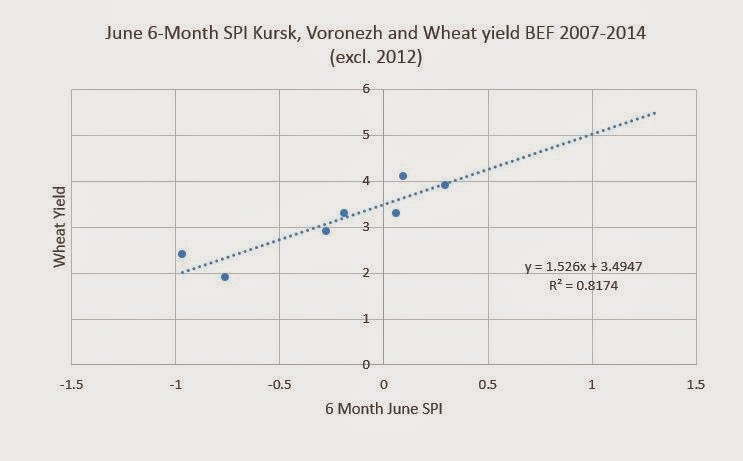 A few words of caution here. While one would expect that there would be good correlations with precipitation anomalies and crop yield, these two tables can just be flukes. The R2s are just too good, and there are not a lot of data points. I have however gone back and double-checked various parts of the data processing I have done. I also checked how well SPI predicts corn and wheat yields for Trigon in Kharkiv and Kirovgrad, and in some cases got good results, and in some cases not so good results. With respect to wheat, you can improve the not so good results by some tinkering based on reasonable assumptions. The only thing that cannot be improved by tinkering with the data is the relationship between Trigon corn yield and SPI in Kirovgrad.

In general, I can say, for obvious reasons, sometimes 3 Month SPI is a better predictor of yield and sometimes 6 Month SPI is. This is the advantage of SPI. There can be a 3 month dry period in a 6 month period that is otherwise considered wet.

In the end, there are not enough data points to base a proper analysis on. I’m just playing around with data and this is what I get. As I’ve said before, this is just a blog. Also, I am no expert in precipitation or meteorology. You can see this as me putting up my notes on this blog for other people to react to if they feel like it.

I do however think that these companies should consider using SPI to report on precipitation in their operational areas.